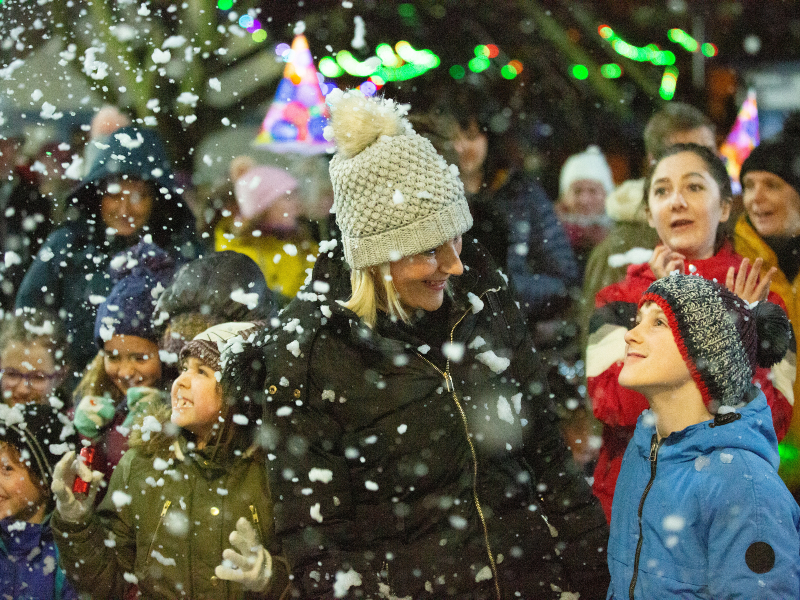 17.30 Countdown to the Christmas Light Switch On

18.10 Live music and performances by local artists around the town until 19.30

All times are approximate and subject to change

Top soap-star Chris Gascoyne, who’s been Coronation Street favourite Peter Barlow for more than 20 years, will be lighting up Scarborough’s town centre for Christmas on Thursday 14 November during the Big Light Switch-On spectacular!

He’ll be joined on stage by Twinnie Lee Moore, a Yorkshire lass famed for her stage and screen credits including Oscar-nominated film The Wife (alongside Glenn Close, Jonathan Pryce and Christian Slater), but now a rising country music star acclaimed as a Rolling Stone ‘stand-out’ act in 2019, and currently on tour with Kiefer Sutherland.

At the event, Chris and Twinnie will be waving their magic wands to illuminate hundreds of colourful Christmas baubles that will cast rainbows of colour onto the streets below and a traditional Christmas Tree.

Then an exhilarating night of action begins, hosted by guest presenter Ryan Swain from Clubland TV, which will also include a spectacular laser-light and sound show, magic and music, street performance and carol singing, and the launch of Late Night Shopping on Thursdays.

After they’ve switched on the Christmas lights, there will also be an opportunity to meet both Chris and Twinnie in the Brunswick Centre, where they’ll be signing autographs!

There will also be a host of pantomime characters from the Stephen Joseph Theate and from the YMCA’s Jack and The Beanstalk roaming the street, so make sure you say hello!

The Christmas Light Switch On, will also be the launch of the Treasure Trail in association with the Stephen Joseph Theatre.